General Admission tickets will go on sale to the public Saturday, June 3, with $1 from every ticket sold being donated to Rethink Breast Cancer. Tickets include 2-day access to both concerts as well as an extensive offering of attractions such as the Hats & Horseshoes Party presented by Stella Artois and the main event, the running of the 158th Queen’s Plate horse race.

“After shattering attendance records last year, the Queen’s Plate will be bigger and better in 2017,” said Jim Lawson, CEO, Woodbine Entertainment Group. “We are building events that offer a great guest experience at Woodbine and the blend of live music, food, fashion and thrilling horse racing will introduce the sport to many in a terrific setting.”

The Queen’s Plate Festival kicks off on July 1 in celebration of Canada’s 150th birthday with live racing, incredible activations and a show-stopping post-race concert by home-grown talent, Our Lady Peace.

On July 2, fashionable crowds will flock to the track to witness the jewel of Canadian horse racing – the $1 million running of the Queen’s Plate. This year’s event will have live music across three stages, fashion, food and fantastic horse racing. The 2-day festival will come to a spectacular finish on Sunday evening with a live concert by the Goo Goo Dolls.

An event-within-an-event, the Hats & Horseshoes Party presented by Stella Artois remains a race day favourite among young urbanites and style-setters donning dapper suits and floral frocks. After walking the red carpet, guests can play lawn games, learn to place a bet, and participate in the Fashion at the Races Best Dressed contests for men and women.

New for 2017 is the American Express Lounge. American Express Canada is a major sponsor of the Queen’s Plate Festival this year. Through this sponsorship, Amex Cardmembers will have access to a Front Of The Linepresale before the general public, as well as exclusive onsite benefits, including:

“At American Express, we’re always looking to enhance the Cardmember experience with unique offerings – that’s why we’re thrilled to sponsor the Queen’s Plate Festival for the first time,” said Tina Santoro, Director, Advertising & Sponsorships, American Express Canada. “With a wide range of events and activities to attend all weekend long, our Cardmembers will enjoy elevated experiences from beginning to end.”

Guests of the 158th Queen’s Plate can sip on Lily Sparkling Wine or enjoy a Blue Diamond, the race’s signature cocktail, while feasting on gourmet summer fare from the city’s best food trucks. Options include seafood from Buster’s Sea Cove, sustainable local fare from Heirloom, grilled cheese from Meltdown Cheesery, and an array of fun foods from the Apple Fritter Factory.

Follow along @WoodbineRacing for style inspiration, track tips & tricks, horse racing lingo lessons and the latest updates on everything #QP17.

TICKET AVAILABILITY & ACCESS
General Admission tickets for the 2-Day Queen’s Plate Festival are thirty dollars ($30) and include access to both concerts, grounds, and the Hats & Horseshoes Party presented by Stella Artois. American Express Lounge presales begin Thursday, June 1 at 10 AM. Tickets will go on sale to the general public Saturday, June 3 at 10 AM.

Tickets for the VIP Paddock Party held in Woodbine’s rustic and chic Old Standardbred Paddock are available now for seventy-five dollars ($75) and offer exclusive access to the Paddock Party and private trackside viewing area, in addition to a premium concert viewing area on July 1 & July 2.

American Express Lounge VIP packages will be available beginning June 1 for three-hundred and fifty dollars($350) and provide an elevated guest experience. Packages offer all the benefits of the VIP Paddock Party ticket, plus gourmet food and alcoholic beverages, valet parking, and exclusive access to the VIP tent in the Hats & Horseshoes Party presented by Stella Artois.

Grandstand seating, including access to both concerts, is available now starting at forty-five dollars ($45) and selling fast.

All tickets are available for purchase by visiting www.queensplate.com.

Inaugurated with royal blessing in 1860, the running of the Queen’s Plate stakes has taken place each year since. The history of the race is closely linked with that of Toronto, and is regarded around the world as an event of international importance within the horse racing community. Each year, a member of the Royal Family or representative of the Monarchy in Canada attends the event and presents the Queen’s Plate trophy to the winning owner.

The Goo Goo Dolls are one of the most globally respected and influential forces in popular music, selling more than 10 million albums since 1986. They have scored 14 Top 10 radio hits (more than any other artist in the history of the Hot AC format), including “Name,” “Slide,” and “Iris,” the latter spending nearly 12 straight months on the Billboard charts and holding the No. 1 position for 17 consecutive weeks. The band has toured the globe countless times, performed in front of millions of fans, received numerous awards (including four Grammy nominations), and recorded and released ten studio albums, including their latest, Magnetic, which debuted at No. 8 on the Billboard Top 200 chart and at No. 2 on the Top Rock Albums chart, propelled by the single “Come To Me” — the fastest-growing single in the Goos’ history. Rzeznik has also been honored with the Songwriters Hall of Fame Hal David Starlight Award. 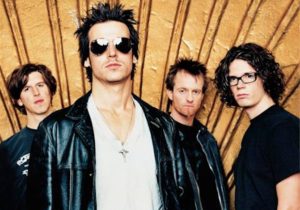 OUR LADY PEACE
When Mark Van Doren, the American poet and teacher, wrote his famous work, “Our Lady Peace” in 1943, he couldn’t have imagined the concept of rock’n’roll, let alone that a Canadian rock group would adopt his title for their name. Consisting of Raine Maida, Duncan Coutts and Steve Mazur, Our Lady Peace is one of the most successful bands in Canada today. The band has sold over 5 million albums worldwide, won four JUNO Awards and ten Much Music Video Awards – one of the most MMVA’s ever awarded to any artist or group. The band’s latest album “Curve” debuted in the Top 10 of Canada’s national album sales chart. The album’s first single, “Heavyweight”, charted at #1 on Canada’s Mainstream Rock radio airplay chart.