MOTHER TERESA: NO GREATER LOVE, a new documentary film, will be premiered in theatres in select markets in Ontario this November 2nd and 3rd only. 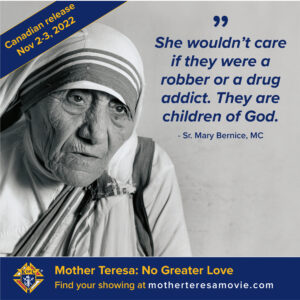 The film was premiered in the U.S. earlier this month and was a smashing box-office success. In fact, it earned more than $1.2 million in ticket sales and producers immediately announced that a large portion of proceeds from ticket sales would be directed to charitable efforts that advance the legacy of Mother Teresa.

The documentary was released to commemorate the 25th anniversary of Mother Teresa’s passing.

This documentary is sure to inspire – especially the youth who may not know that much about Mother Teresa and the religious communities her work inspired.

The film will be airing in select theaters in Caledon & Whitby.

Check out the trailer and more information here: https://www.motherteresamovie.com/.