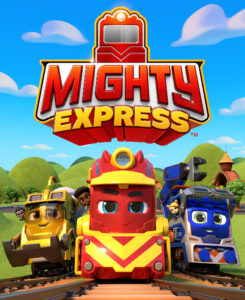 “Spin Master Entertainment excels at developing evergreen global properties through compelling story telling and engaging characters that resonate with audiences,” said Spin Master Entertainment’s Executive Vice President Jennifer Dodge. “From the importance of friendship and teamwork, to boosting kids’ confidence in their own attributes and abilities, the Mighty Express series is a fun place for children to laugh and learn alongside the characters in the show. We are so excited for families to discover our first Netflix original series and we look forward to developing more content for the platform in the future.”

The Mighty Express series is being animated by the Vancouver-based toon house Atomic Cartoons, is created and executive produced by Keith Chapman, the creator behind global mega-franchises including PAW Patrol and Bob The Builder®. The series is also executive produced by Dodge and Spin Master’s co-founder and Co-CEO Ronnen Harary.

Mighty Express marks Spin Master Entertainment’s first series launching straight to a streaming platform and is part of the company’s commitment to a multiplatform content strategy. The Mighty Express franchise is wholly-owned by Spin Master. The company will retain the rights to distribution of the series (outside of SVOD) including licensing of consumer products and a toy line set to launch in 2021.

Mighty Express SynopsisHop on the fast track to Tracksville, where, in a vast, playful, quirky world crisscrossed by railway tracks, a team of trains and their kid best-buddies keep things moving and get the delivery done no matter what the trouble – one adventure after another! Each of the trains has a specialty which they use when going on Mega Missions or hauling cargo, be it animals, equipment, or giant dinosaur bones. They always rise to the occasion when trouble strikes!

About Spin MasterSpin Master Corp. (TSX:TOY) is a leading global children’s entertainment company creating exceptional play experiences through a diverse portfolio of innovative toys, entertainment franchises and digital toys and games. Spin Master is best known for award-winning brands PAW Patrol®, Bakugan®, Kinetic Sand®, Air Hogs®, Hatchimals® and GUND®, and is the toy licensee for other popular properties.  Spin Master Entertainment creates and produces compelling multiplatform content, stories and endearing characters through its in-house studio and partnerships with outside creators, including the preschool success PAW Patrol and 10 other television series, which are distributed in more than 160 countries. The Company has an established digital presence anchored by the Toca Boca® and Sago Mini® brands, which combined have more than 25 million monthly active users. With over 1,800 employees in 28 offices globally, Spin Master distributes products in more than 100 countries. For more information visit spinmaster.com or follow on Instagram, Facebook and Twitter @spinmaster.